Time stamped backup of projects created before over writing file.

Update of framework to Microsoft JDK 17.0.4 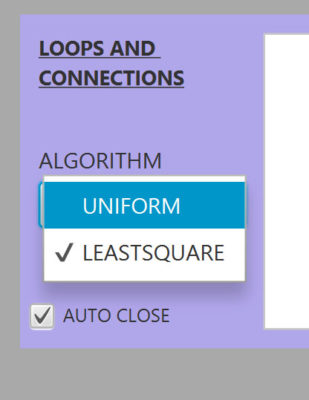 For the loop closures, the software will use when ever possible the GPU of the graphic card to make the calculations faster. 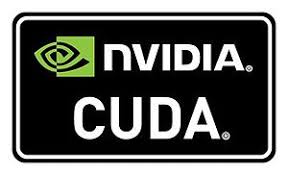 The track generated by Seacraft's ENC2 navigational console can now be imported into Ariane. 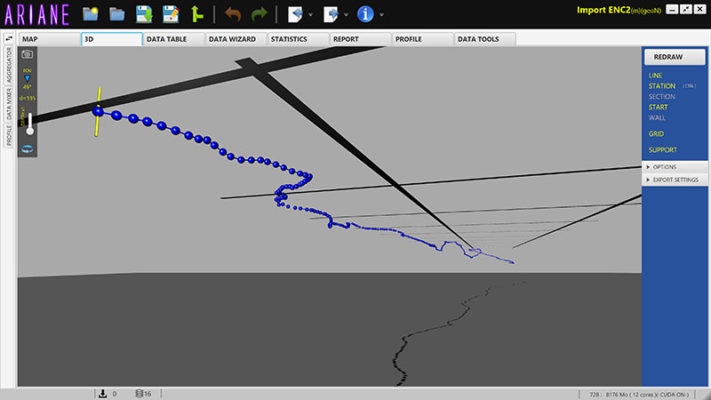 A new display mode has been added to the 2D map to show the direction in which the survey has been done.

In complex profile the control points can now be dragged with the mouse and the tension controlled with the wheel.

The User Interface has been changed to allow a proper display on smaller screens.

The project uses now Amazon Corretto 11 LTS as framework on all 3 supported platforms.

Profile tensions were not properly taken in account for 3D display.

Corrected bug where a section was not removed from the filter table when data was not filtered and stations removed.

It is now possible to aggregate your various projects, add customized satellite overlays and other KML paths. 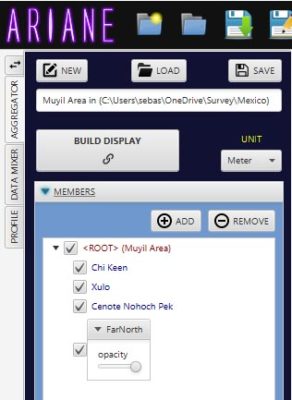 A new Data Mixer panel has been added. You can now average the resurvey you do with the original data. 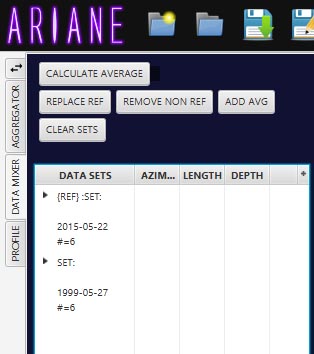 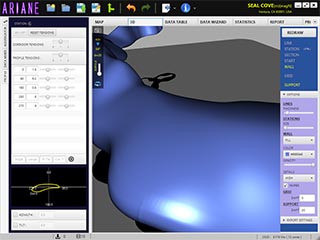 The coordinates of the mouse get displayed while it moves on the map.

A new file format TMLU has been introduced. It is an uncompressed abbreviated XML file that can be used in GIT systems.

An export option has been added to the 3D map. The KML export can now include the 3D walls.

A GIF export function has been added allowing the creation of animated GIF showing the progress in exploration over time.

The number of satellite images being downloaded is displayed in the lower status bar of the main window.

The distance between the mouse cursor and a selected station gets displayed automatically.

Data can be "Excluded", in this case it won't be taken in account in statistics nor map redrawing but still be saved in the file.

A lot of optimization in background to speed up redraw and loop calculation on multi core hardware.

SRV and WPJ files generated for Walls can be opened directly in Ariane. Those file formats support a lot of different options. Only the most common have been implemented for the moment. If you need different formats let us know! 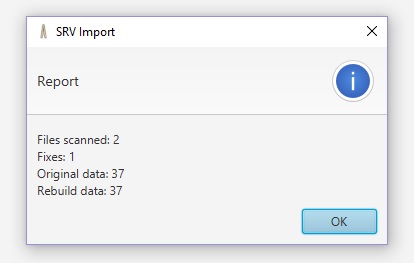 All the import options ( Direction and depth variation type) have been added to the import window of MNemo.

When imported data has incoherent length/depth variation an autocorrection feature has been added. 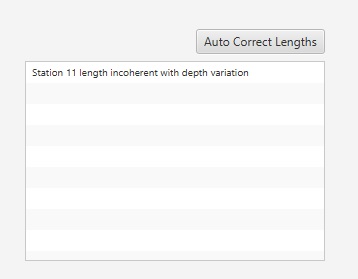 The license information could get lost on Mac OSX.

A UTM conversion tool has been added to the DataWizard

A tool to make your file anonymous ( removing comments,dates and names) has been added in Data Tools

The software has been moved to the latest version of Oracle Java (v10.0.1)

Undo in cartography was flattening layers for Overlays.
The export of Compass DAT was erroneous on Mac OS X
When data was filtered and didn't contain a START the profile would not be displayed correctly

The wall if defined gets exported in the KML file.

A horizontal plan as well as a dropped shadow can be activated to make the 3D display of the cave more readable.

In the Data Wizard the user has the possibility to right click a Data line and remove it from the table. This is particularly useful for MNemo import with markers or faulty shots. 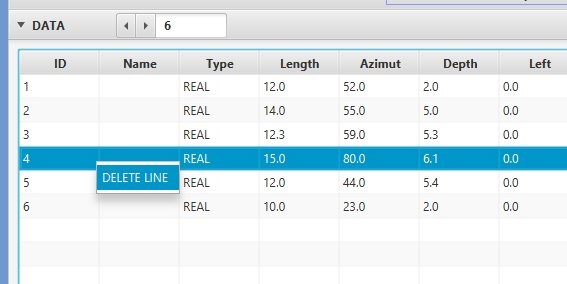 When the software is updated a panel with the info about the modification is displayed. It can be hidden by clicking on the close button next to the Tab Title.

Profile calculation was erroneous for certain end of lines.
When a survey with MNemo was interrupted because battery was empty, the software could not import the data nor any following it.

When opening the downloaded file on your Mac with Mac OS 13, a message will be displayed saying the file is damaged. Don’t worry, everything is correct! You’ll have to allow the software in the security settings.